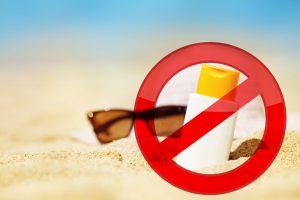 You may have seen the news recently that two of the most popular summer travel and tourist destinations in the U.S. are banning your favorite sunscreens. Though rumors and headlines sometimes suggest otherwise, only Hawaii and Key West, Florida have banned two sunscreen ingredients, and the bans will not go into effect for another year or two. This gives manufacturers time to decide if it’s worth changing their formulas to fit new regulations.

Hawaii and Key West have banned two major sunscreen ingredients: oxybenzone and octinoxate. These ingredients are targeted because they are believed to be a danger to coral reefs. They can cause coral bleaching and other effects that lead to the death of reefs, removing an important marine ecosystem. By 2021 both locations plan to ban the sale of any sunscreen product that contains the two ingredients. Furthermore, manufacturers will no longer be permitted to ship certain sunscreens to Hawaii.

However, according to Glamour, legislators from Hawaii and Key West acknowledge there is no legally enforceable way to keep these sunscreen ingredients off their beaches, even when the bans take effect. It is easy for visitors to unknowingly import banned products via their suitcases.

Though it may not change your personal sunscreen choices, this ban could affect sunscreen manufacturers’ choice of ingredients. Not only must they stop selling some of their products in these locations, but the companies could also be negatively viewed by customers in other locations for a lack of environmental stewardship. As discussed in our last blog post, this is something that more consumers have been voicing opinions on through social media and it has been demonstrated in how they spend their money.

So far, the ban has not had a huge effect on manufacturers because the FDA has not found enough evidence to prohibit use of the ingredients across the U.S. This may change as more research is conducted and as consumers become more interested in using products they view as more sustainable. We are watching these bans from a liability perspective, keeping an eye out for enforcement actions that may affect the products cosmetics manufacturers produce and the products salons and spas offer to their clients.

Teri Pereira, Account Manager for Foundation®, a specialty insurance program for domestic cosmetics manufacturers, importers and distributors at Brownyard Group. She can be reached at tpereira@brownyard.com.