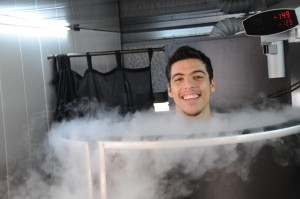 If you follow trends in salon and spa services, you have probably heard about cryotherapy. Despite its legions of devotees, the idea makes many people cringe at first—being submerged in sub-zero vapor doesn’t sound therapeutic, let alone pleasant. In fact, it sounds downright dangerous. However—so far—cryotherapy is accepted as safe.

What is cryotherapy?
Cryotherapy originated in Japan and then spread to Europe. It was used primarily to reduce swelling and inflammation to help people manage pain. In 2015, its popularity exploded in the United States, where people flock to it for the endorphin rush and concurrent sense of well-being it provides. Some devotees claim multiple sessions make them feel more energized, while some athletes say it improves their performance.

So how does it work? Someone undergoing treatment disrobes, dons protective gloves and booties and steps into the pod-like cryotherapy chamber. The chamber is filled with liquid nitrogen, which brings the temperature down to as low as -280 degrees Fahrenheit. One session lasts up to three minutes, with a trained technician waiting nearby and monitoring for any problems. From reports that we have read, it seemed that every person who went in came out with an energized rush. However, practitioners recommend multiple sessions to reap the long-term benefits of the treatment.

Are there any risks to cryotherapy?
As with any therapeutic spa treatment, cryotherapy carries some risks. People with heart conditions or blood clots should not partake, and neither should pregnant women.

One recent death in the news should serve as a cautionary tale. A young woman, who managed a business with a cryotherapy chamber, decided to administer a treatment session herself—after hours and without any supervision. Ten hours later, she was found dead on the floor of the chamber. It is believed she fainted and was submerged into the liquid nitrogen, where she was cut off from oxygen. With no one to notice her collapse, she died.

Have you tried cryotherapy? Do you insure or work at a spa that offers it? What do you think about it? Let us know on social media: @SASSI_Brownyard or Facebook.com/SASSIInsurance.

Sean Brownyard is executive program manager for SASSI, the Salon and Spa Specialty Insurance program at Brownyard Group. He can be reached at sbrownyard@brownyard.com.