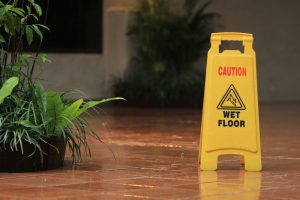 According to the National Floor Safety Institute, falls are the leading cause of hospital emergency room visits each year, accounting for more than eight-million such visits. More than one million of these visits, or 12 percent, are due to “slip and fall” accidents.

In this litigious time, business owners should take note of these statistics. Slips and falls are a major source of insurance claims, and when an accident occurs around your business, simply being associated with the incident can lead to lawsuits.

Consider this story: a salon had recently moved from a strip mall where it had been located next to a florist. The salon staff had left some of their equipment and supplies behind as they finished out their lease. A woman tripped and fell outside the florist’s shop, injuring herself seriously in the process. The resulting lawsuit considered every business in the strip mall negligent for allowing the accident to occur—including the salon, which was no longer operating in that location.

This salon was “in the wrong place at the wrong time,” even though it was, technically, no longer there. Nonetheless, simply being associated with the mall meant they were on the hook for about $80,000 in this claim; a total of $250,000 was awarded to the claimant, which was split among three businesses.

Why didn’t the salon fight the lawsuit? Unfortunately, the cost of litigation would have been more than the woman was asking, so the businesses settled. This is the case more often than not in these situations. In addition, these scenarios could put your business in a negative light, and in a local business community and the beauty industry, reputation is everything.

In a similar case, after a spa owner fell on a cracked sidewalk in front of her business, she requested that her building manager address the issue. Unfortunately, he did not fulfill her request and never attempted to fix the problem. Although she still had her concerns, the salon owner decided not to continue pressing the landlord about the situation. A few months later, another person tripped on this damaged sidewalk, seriously injuring himself in the process.

As these stories show us, it is easy for salon and spa owners to be implicated in costly legal battles over accidents that may not have involved them. That’s why it’s important to get general liability coverage. A general liability policy includes coverage for third-party bodily injury, which helps protect businesses if someone is hurt on their property. As you can see, the risks associated with services are not the only potential sources of lawsuits against salons and spas.

Kathy Lopez, Account Manager for SASSI, the Salon and Spa Specialty Insurance program at Brownyard Group. She can be reached at klopez@brownyard.com.